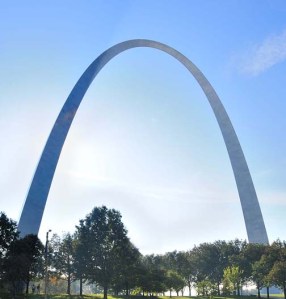 The St. Louis Gateway Arch is built in the shape of an upside-down catenary curve.
Photo by HHsu/Shutterstock.com

An integral part of my suspension bridge was the catenary curve of the two main cables. The catenary curve is the curve assumed by a heavy uniform flexible cord hanging freely from two points. The curve of the main cables would evenly distribute the weight of the deck among all of the suspenders, which are the cables that run from the main cables to the deck assembly. The curve also determines the relative lengths of all the suspenders.

I had to figure out how the cables were going to curve in the most efficient and eye-pleasing manner to support the structure while still looking cool. The factors to consider for the curve can get complicated. There truly is a mathematical formula to get the “ideal” weight load distribution in a curve. Engineers call that ideal an “equal resistance catenary.” This is when the cable’s resistance to breaking is equal along its entire length. To accomplish this bit of perfection, we consulted my wife’s brother the engineer. He was a great help in getting a better understanding of the physics behind catenary curves.

But, being a hands-on guy, I created a scale model for determining the catenary curve for my bridge design. This way, I could draw up the posts and deck at the pre-determined height and length, respectively, then set the catenary curve to my liking by using pins and heavy nylon fishing line. I could double-check using the math, but it was nice to have something physical that could be adjusted.

This approach at determining the catenary, though being less precise than the mathematical one, can be used to solve undetermined configurations.

You can read more about the catenary curve and another aspect I had to consider, harmonic resonance, in my book, Building a Small Cable Suspension Bridge. There is a link to purchase it on my website: http://www.wildcatman.com.

Images, diagrams, and text copyright 2013 by Marvin Denmark unless otherwise noted. Please do not copy and post my content anywhere without my permission. Thank you.